Our Home Location is Douglas in the Isle of Man

Want to get in touch? 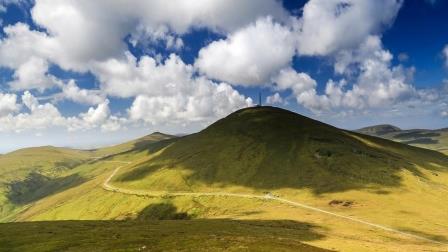 The island has many hills but only one mountain, Snaefell, which at 2,036ft high just about qualifies as a ‘mountain’ rather than a hill according to the Oxford English Dictionary. However, there is no universally accepted definition of a mountain and many geographers state that a mountain only needs to be greater than 300 metres (1,000 feet) above sea level to qualify.

A seven mile stretch of the famous TT road racing course goes over the Snaefell mountain from Ramsey to Douglas – which is where the name ‘The Mountain Course’ comes from. There is also a long straight on the climb up the mountain known as “The Mountain Mile”.

Fact 2: Two Cats With No Tail

The Manx cat is famous the world over for its distinct lack of tail – in fact, there are two varieties of Manx cat; the ‘rumpy’ has no tail at all, whilst the ‘stumpy’ has a very small tail. The breed also exhibits very large hind legs and a rounded head. Manx are prized as skilled hunters, and have often been sought by farmers with rodent problems.

According to legend, two Manx cats were last to board Noah’s Ark and their tails became trapped in the closing door. Manx cats are a common feature around the Island and they even have a pub named after them which, inventively, is called “The Cat With No Tail”. The Isle of Man is the motorcycle road racing capital of the world. The Manx parliament passed a law in 1907 allowing the roads to be closed and used for the TT (Tourist Trophy) race. It is the most prestigious motorcycle race in the world and a single lap covers 37.73 miles.  The festival takes place at the end of May (Practice Week) and the beginning of June (Race Week).  Each session is marshaled by over 500 volunteers known locally as ‘The Orange Army’ due to their high-vis orange jackets.

But it’s not all about the TT! There are two other road racing tracks on the Island which take place on closed public roads; the Castletown circuit in the south and the Jurby circuit in the north.

The Manx Loaghtan sheep is a breed of relatively a small sized sheep native to the Isle of Man. It is also sometimes spelled as Loghtan or Loaghtyn. It is one of the Northern European short-tailed sheep breeds which descends from the primitive sheep once found throughout Hebrides, Scotland and Shetland Islands

The Manx Loaghtan sheep are are fined boned animals and have short tails. They are easily characterized by their horns – they usually have four horns (but some are also found with 2 or 6 horns). They are primarily bred for their meat which is considered a local delicacy. Fact 5: The 5th of July is Tynwald Day

The Island has the world’s oldest continuous parliament, known as Tynwald, which was setup by the Vikings in 979 AD. Although today’s parliament has modern offices in the capital, Douglas, on the 5th July it meets at Tynwald Hill, an ancient Viking site near St John’s, to declare each law that has been passed in the past year. During the ceremony the laws are read in both Manx Gaelic and English.

Any Manx citizen can hand deliver a “Petition for Redress of Grievance” at the Tynwald Ceremony which will then be considered by the government. Seven petitions were handed in at the Tynwald Day ceremony in 2017 calling for the parliament to act to change what campaigners believe is a grievance.

The six lighthouses in the Isle of Man can be found at the Calf of Man, Chicken Rock in The Sound, Douglas Head, Langness, Maughold Head and Point of Ayre.

A scheme to place a lighthouse on the Calf of Man in the south was considered as early as 1658 to address the concerns of Liverpool merchants. In 1815 theNorthern Lighthouse Board, the Scottish lighthouse agency, asked for and received permission from the British and Manx Parliaments to build lighthouses at Point of Ayre and Calf of Man to protect shipping to and from the Firth of Clyde in Scotland. The Board has continued to maintain the major lighthouses on the island ever since. Manannan Mac Lir (Son of the Sea) is the ancient sea god who ruled the Island. Manannan protected the Islanders with his cloak of mist and had the power to make one man appear to be one hundred. Today, he’s said to cloak the Island to protect it from invaders. The mist can roll in extremely quickly and often disrupts the TT motorcycle festival due to the AirMed helicopter being unable to land.

Want to get in touch?